Oh, when you think spring break you don’t think the Czech Republic? My traveling companion and home homie, Sofie Jacobs, puts it best in her blog post:

“While some of my friends spring break-ed in gorgeous and tropical locations like the Amalfi Coast, Mallorca, and Portugal, Daniella and I went somewhere even MORE glamorous, IF. YOU. CAN. BELIEVE. IT.: EASTERN EUROPE!!!”

And because our unconventional spring vacation wasn’t going to involve lounging on a sunny beach, we focused our energy on destroying any semblance of bikini body we might have with the carnival of treats that is Prague’s Old Town Square. I present to you a three course meal, courtesy of a single historical quadrant’s worth of food stands. 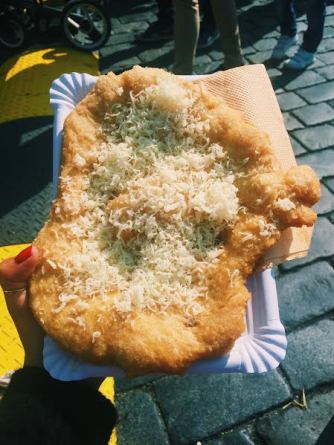 Processed with VSCO with c1 preset

Processed with VSCO with c1 preset

According to a little Google search – I much prefer researching culinary history than studying for my pending Geography final – lángos traces its origins to Hungary. However, variations on the flatbread exist across Eastern Europe in countries such as Serbia, Slovakia and the Czech Republic. In Old Town Square, the rendition of the dish is rubbed with a thin coat of garlic, coated with shredded cheese and drizzled with ketchup. While I have professed mixed emotions regarding avocados, I have a pretty hard stance on ketchup: I will have none of the sickly sweet smelling sauce. So despite our pursuit of traditional food, we decided to circumvent the established recipe for the always successful garlic cheese combination. While my fellow traveler preferred the bubbly outer layer sans toppings, I will forever have a guilty pleasure complex whenever it comes to cheese in any design. Maybe its the fleeting nature of the ingredient: I’m going to have to recommit to my loosely dairy free lifestyle when I return back to America. Or maybe its just the thrill of enjoying something I know is no good for me – Sonic’s mozzarella sticks are basically the ultimate vice. If we are being completely honest, cheese is kind of like my leather clad, motorcycle driving boyfriend who my friends and family hate but I’m convinced that this time I can change him. Is this getting too personal? I’ve never dated anyone who has a motorcycle for the record. For heaven’s sake, I’m afraid of bicycles and I haven’t driven a car in two years. But I digress – my authoritative decision on lángos is that you can never go wrong when you put cheese on bread, in any form and in any country.

We alternated between passing between each other the flat lángos and a snack with some height: the looming potato spiral. While you will never hear me vocally support eating something solely for the Instagram, I would be lying if I don’t occasionally order with the pending photo in the back of my mind. When it came to potatoes in the square, we knew they were on the menu – the question was in what shape. Thinly sliced and whimsically lanced on a wooden stick is an imaginative alternative to the usual bag of Lays. Rather than breaking off in brittle pieces, the massive potato tendril can be pulled off the top of the rod, curve by curve. Surprisingly, the potatoes did not pack the kind of crunch you would think based off their chip like appearance. Rather, they had a crispy skin and a softer inner layer – a potato pulling from a multitude of references ranging from brunch casseroles to vending machine favorites. 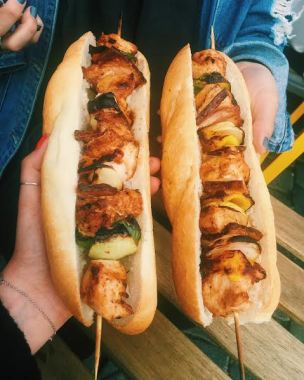 While I was determined to get a kielbasa, Sofie was far more interested in the kebabs nestled into thick bread boats. As we inhaled the smokey scent, I traded teams and joined her in the skewered endeavors. We had no idea the kebabs – in addition to their charred chicken, peppers and onions – would also have thick slices of ham wedged between pieces Tetris style. But bonus ham is a surprise I am always happy to accept and the purest form of the more the merrier. We sat watching for a moment to see how more adept eaters were going to approach the skewer. Finally we opted to just tug it out, sword in the stone style.*

*I tried to describe in greater detail the best way to avoid your chicken falling lose as you maneuver the stick but there was no way to accurately guide without sounding like a strange rendition of Fifty Shades of Gray, featuring Czech kebabs.

While the baguette was too dense and plentiful for my liking and obstructed a bit from the more savory components of the meal, it was a lighter alternative to the kielbasa. Much appreciated after our heavy lángos and potato starters and with anticipation for our pending dessert. 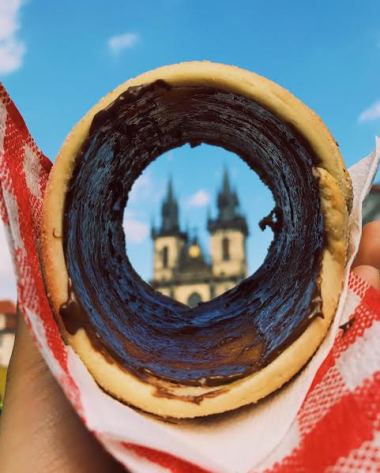 I must begin by crediting Sofie with this amazing photograph. We quite literally circled the square taking shots of the trdelník with different landmarks in sight: a fountain, the astronomical clock, the church, the square. At some point, we were all hands on deck trying to get a rendition of Prague, through the eyes of the trdelník. These tubular snacks are up there with the potato spirals when it comes to re-imagining a simple joining of flavors in inventive form. However, I don’t think the trdelník’s founders were too focused on how the dessert would appear in VSCO C1 filter. The trdelník is made by wrapping dough around a spinning pipes in mesmerizing style. The sugary walnut coating is decadent and nostalgic, like funnel cake at an amusement park. While it was recommended in cone form and filled with ice cream, we were partial to the slathering of Nutella, telescope style. Trdelníks: cooked over an open fire for a surefire way to produce the sweetest view.